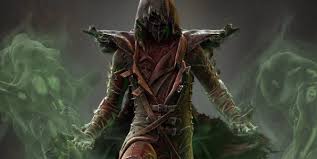 The character above is the playable fictional characer, Ermac of the Mortal Kombat Universe. I in no way have ownership of the character

Now you’re wondering about copyright. How is it possible for dota to use ermac as a design for their game. This is when fair use comes into play. Which allows some leeway in production, when the court decides they look at how different it is.. There are several differences in Malefist than ermac. Ermac is a necromancer i believe if i recall right. Malefist is an antimagic soldier. So the themes are different.  Also their is some leeway in fair usage. Otherwise dota couldn’t get away with designs such as lina, pl or pudge. and many mobas would fail after using the drow ranger appeal they have in their game. These heroes are products of other games but look different enough where its usable. Which brings up the Shannara books which is Tolkien fan fiction. There is like a 30% difference that is required to be different, i believe…i forget.

I’am in a dilemma, On one end I would desire if icefrog changed Silencer’s name into Inquisitor. On the other end, I want it to be a new hero with a look similar to Ermac in Mortal Kombat X. Both ideas are crazy. So what would be the disadvantages and advantages of both.

In renaming Silencer, Dota players will get lost on the first couple of weeks. After that change, People will complain. This change also gives more freedom to change the hero into something better. Different abilities can be given to the hero and he can still retain his anti-magic but with a little difference in abilities he can have his abilities changed to.

For example, I have thought of five abilities that could go on The newly changed hero maybe even a six. My problem with the current silencer Is the bloodseeker effect. I love him when hes on my team but when hes against me it’s a pain in the arse.

One change that could be given is changing Global Silence into an ability called suppress. It fits the theme perfectly because he can be thought of suppressing abilities and faith in an enemy deity. Other abilities I thought of are an ability that when a spell is casted by enemy or ally that this causes an allies damage and attackspeed for to increase or if casted on an enemy for them to take damage and get lowered damage.

Another ability that could be placed on an inquisitor is causing allied attacks to lower enemy damage and armor.

This leads into a replacement ult Going with the second ability the one where allies can lower enemy armor and destroy their passive usage could lead into an ultimate I like to call, Faith of the Clergy. FotC basically works like a plague. Meaning it spreads to any nearby heroes. Each second infected units produce an illusion of the unit infected.

Lastly, a mediocre ability that drains int and life regen from an enemy per second and gives it to units surrounding the inq.